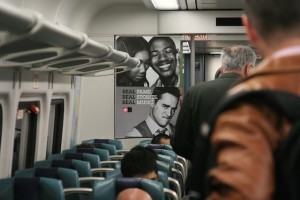 I have always had a strong fascination with advertisements, and the power dynamics the symbolize. To give context briefly, some of my first small acts of unsanctioned public art was in high school, when I was tired of looking at ads at the train stop by my house. It was empowering to see what a small amount of house paint could do to transform a space. And the ease of it kind of amazed me, like “Why isn’t everyone doing this all the time? No one enjoys ads…?” It turned me on to larger and more ambitious forms of culture jamming and public intervention, and the interest eventually led me to this amazing class!

For this project I will be replacing the ads on the Metro-North with works I create. One of the main factors for this project will be audience. I realize that I had a reductive and oversimplified view of the riders of Metro-North, North White Plains line: rich, white and corporate. Perhaps that is a significant portion of the riders of the train, but as my classmates pointed out, the janitorial staff and cooking staff from various places also take that train from the suburbs back to the city, which is a completely different audience. I’m taking this into consideration as I put together my ads.

Another thing I considered is the content of the ads themselves. What are they? Is it for food, products, services, broadcasts? One of my classmates suggested something brilliant: instead of replacing the work completely, why not work with the material that’s already there? Perhaps twisting the message. This would be similar to the work of PosterBoy and Ron English.

This project is, in a way, an extension of my sticker project since I decided to replace a bus stop ad with art for that. I am inspired by the work of Jordan Seiler and his project Public Ad Campaign. Jordan is much more articulate than I am in describing why it is important to reclaim the spaces which are dominated by advertisements.