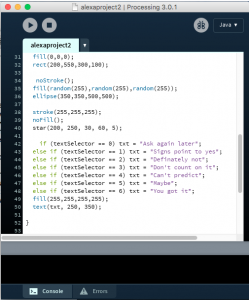 For my second project, I’m making a “magic 8 ball” that predicts answers to the users’ yes/no questions. So far, the code that I’ve used incorporates a text selector. This allows the ball to generate random text when the user clicks on it. So every time they clicks on it, they will get a different answer than the previous time. This creates the effect that the ball is actually answering them because the generated answers aren’t consistent.

I plan to work on this project further by adding more details to the overall project. For example, I want to play around with different fonts and the design of the magic ball. I want the design to look captivating to the user. So far, I decided to have random colors flash on the ball. I think that this creates a mystifying aspect to predicting the future. I’m planning on evolving this design further by developing the base to make it look more realistic and adding more stars on the ball. In addition, I want to add more answers for the ball to give the user. I think that that would add more depth to the interactive aspect. 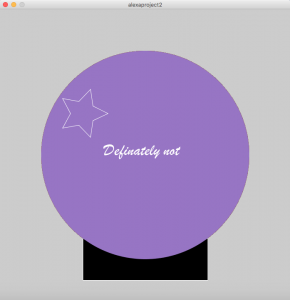 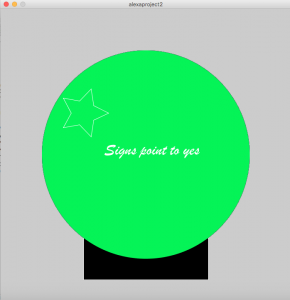 I think that this project has the potential to create a magic circle because it can involve more than one person. People can ask questions in groups or compare answers to their similar questions. If in a group, people can think of questions they want to ask collectively. I think that this project’s function is a universal idea because it is based off of a magic 8 ball. Therefore, it will be able to bring people together because of its’ familiarity. Although this project has the potential to create a magic circle, this may not always be the case because it is primarily targeted towards individuals. For example, a person would ask the ball a question in their head and then click to find out the answer.

Wether used by individuals or groups of people, or even both, I hope that this project is fun for people to play with. People usually are intrigued by finding answers to the unknown, so I think that people would enjoy using this light hearted way to predict the future.