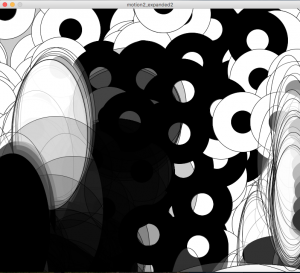 For my final conference project, I designed a web cam that picks up motion detection. When the user moves, the black and white pattern on the screen will move too. This makes the design evolve further because the user keeps on changing it with their movement. Every minute, the pattern changes into a new one with different sized shapes with different levels of transparencies. This keeps the user more engaged because there are more surprises in how the pattern will change.

I was inspired by the artists Bridget Riley and Ryoji Ikeda because they both primarily work in black and white to create complex patterns and designs. I really admired their styles and I wanted to create a project that resembled their artwork. I think that I was able to accomplish that because I created ten different black and white patterns that are similar to their style.

Creating this project took a lot of planning and time because I had to create ten different patterns. I also got to play with it a lot and test it out. I found it really fun to play around with because it always surprised me. It doesn’t always have the same outcome because the user’s motions will be different every time. This shows that my conference project is abstract and will always be evolving into something new as each person uses it. I decided to have each shape move at different speeds. This added to the abstract element of the project because the pattern doesn’t move in uniform. This means that the user can’t anticipate when the pattern will shift or how it will shift. 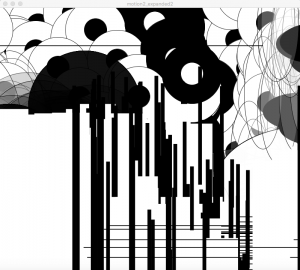 The code of my project involved a lot. First, I imported video into processing, so I could use motion detection through the webcam. Then, I created different variables for each shape within each different pattern. I had 90 variables in total. After that, I made a list of all ten patterns. Within each pattern, I had a section that specified the speed of each shape and how fast it moved, based on the motion detection. For example, I could say that a certain ellipse would move every three seconds, while a different ellipse would move every second. Following this code, was the list of shapes within the pattern. Under void draw(), I wrote the motion count and specified the order and duration of each pattern. 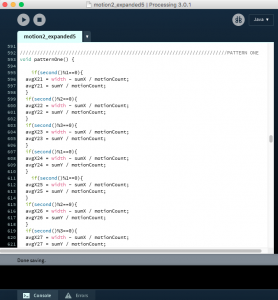 After looking back at Martijn de Waal’s ideology, it is clear that my project falls into the category of a “playground/magic circle.” This interaction that I’ve created offers a site of play, is a voluntary activity, isn’t rational, and forms community. This means that it is more open ended to how people will use the interaction. The user can move in front of the webcam by themselves or with other people. This displays the potential to create a magic circle. If multiple users are in front of the camera at the same time, they can create a different pattern together. This could increase interaction between people because they may choose to work together. For example, they could try to move the shapes to one side of the screen or to hold still to see the pattern freeze. Since the project is very open ended, there are so many things people could try to do with it.

Overall, I had a lot of fun making this project because I really like the idea that it can evolve into something so different and abstract every time. I also really enjoyed deigning black and white patterns because I love the way that they look.