My final form of the conference project is an interactive game entitled Chasing Chi Chi. The player will try to click on the moving character named Chi Chi through touch pad, and chase after it. Chi Chi will bounce around from one side of the screen to other, speeding up every time it is clicked successfully. The player is given with 5 lives and every time the player fails to click on Chi Chi, the life reduces and after 5 failed attempt, the game will be over. The background changes depending on how much life is left, adding on to the excitement of the game.

The studio coding that I have used mainly was loadImage() code and mousePressed(). coding. The most difficult part of my project was that I had to hand draw the background, effects, and the character. I had to create all the art through Photoshop painting tool and drawing tablet. I was fairly new and putting concept into actual form was very difficult. The code beside the studio coding that I used was the Dir coding. In order for Chi Chi to bounce off the wall and move back and forth the screen, I had to command the coding to change direction and limit the range of movement. 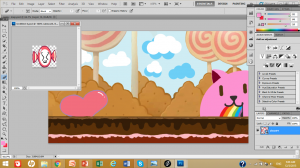 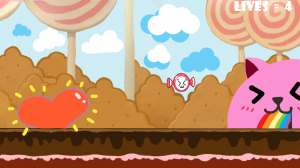 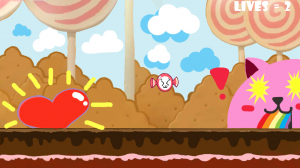 The final form of the project is very different from originally proposed design.  At first I wanted to create a Mario game like interactive display that only moves forward in map. I first wanted to use webcam but the coding was impossible to create so I switched to keyboard. However, I realized that using keyboard lacks physical movement enough to call it a true interaction The Psychology of Everyday Actions talks about, which emphasize on movement with awareness.

Since I am not using a Web cam and creating display vey 2D in a sense, I needed to design an effect in my display that will result in increase of physical movement. This resulted in usage of touch pad as median of interaction. Additionally, moving forward in 2D map was just so boring in interaction with no rewards. So, I decided to make it an interactive game which the character moves back and forth, demonstrating strong relationship with the setting of the game. The player then will affect the main character which result in alternation in background and setting as the interaction progress.

The interactive display explores modern design integrated with in cultures. For Chasing Chi Chi, the background, setting, character design, and character movement were designed to introduce Kawaii-ism. Kawaii-ism is a design concept from Japan that emphasize on cuteness and girlishness, with pink and pastel colors playing dominant part of the concept. Kawaii-ism represent the unique and diverse part of Japan’s culture.

In New Media Art, it talked about how an art can become a symbolism and representation of a certain culture. The reward of learning a new culture of a country is the ultimate goal and it follows New Media’s “informational Interaction and its benefit to establishment of personal and social connectivity”. The project also follows idealism by Martin de Waal of Public Sphere. The strange new cultural medium is communicated and presented through media and through it, integrate new cultures and unify the interactor through new idea.

Overall I am very happy and proud of what I have created. Even though the interactive style have altered a lot, the message I wanted to present and the goal of project was reached.