For my conference project, I plan on coding sketches of a vibrant, technicolor virtual aquarium/ocean using the techniques of noise, variance, dimension, and animation that we learned in class. Using vector drawing, I have created a series of different aquatic animals – including whales, jellyfish, and the ocean sunfish. By animating these drawings and inserting my own fill and stroke parameters, I will make glitchy, generative animations of ocean life that combine the biological and the digital, the technological and the environmental. My conference project will blur the genres of immersive virtual environment and glitchy, generative animation. While I have not mastered or fully represented either field, my conference project will land somewhere in the middle. 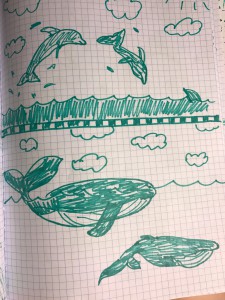 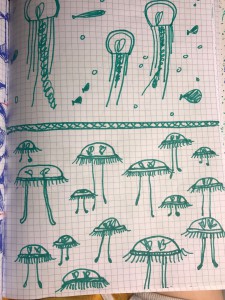 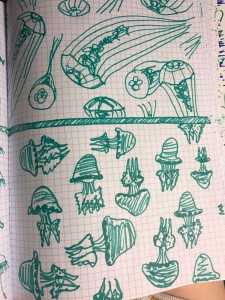 Since I was a little kid playing video games on a GameBoy Color, I have been fascinated with the concept of virtual environment. The idea of rendering something that could exist in real life on a computer screen blew my mind. Since then, my studies have brought me into contact with artists like Pipilotti Rist, Petra Cortright, and Lilian Schwartz. Pipilotti Rist creates vivid, completely immersive environments using digitally processed video projection instillations. Her work blurs the line between the organic and the technological. I draw a lot of inspiration from the immersiveness of her works and the aesthetic vibrance. Petra Cortright is a famous net artist from the 00’s. Her command of interconnected web portals, distinct style layering images over each other, and creation of fantastic digital ecosystems (especially HTML ecosystems)  have also heavily influenced my work. The idea of the blending of the living and the machine, and the life within the machine, was an idea originally constructed by Lilian Schwartz, whose early computer artworks set a precedent for all future digital art works. Her work revolves around the idea of the life within the code, and the human body’s relationship to the machine. Apotheosis (1972) is perhaps the most sublime work in this exploration. Using computer recorded images from within a radiation chamber, Schwartz animates a human body undergoing cancer treatment. The body cannot live with this barrage by a machine which kills the deadly cancer cells, but it is simultaneously being destroyed (healthy cells are destroyed in the process). In terms of coding style, I have been heavily influenced by Kaili Aloupis, whose out-of-the box coding style helped me to expand my thinking of how I could work with the code. Garrett Hsuan command of the code helped me a lot in terms of logical thinking and technicality—I learned a lot of code logic from studying his work.

Different aspects of my conference project are heavily disordered, whereas other aspects are heavily ordered. Each video in Boolean Oceanography falls into a different category on Gallantner’s Generative Art Systems chart. “Cnidaria Medusozoa” is highly ordered. Each jellyfish in the sketch follows a defined path and increases in size at an exact rate. Randomization comes in in the color. Each time that the sketch repeats, there is no exact same color produced. The interesting part of this sketch, for me, is that despite the fact that the colors are never exactly the same, the sketch looks the same each time that it runs. Despite randomization, there is still uniformity. The level of disorder increases in “Aurelia Aurita 1”. Here, size, shape, and location are given parameters but are not plainly defined. Every other frame, the animation shifts and each time the size, shape, and location of each individual jellyfish location changes. Like “Cnidaria Medusozoa,” each time the sketch runs its different from the time before, however the ultimate effect is the same.

Where the disorder becomes more palpable is in “Rainbow Cetology 1”, in which random colors, locations, and dimensions are generated to create a diverse field of made up of varying versions of my whale sketch. This kind of work relates to the randomization that Gallantner speaks of in artists like Elsworth Kelly and William Burroughs. This kind of work falls into what Gallantner describes as the narrow art historical definition of generative art: “a form of geometrical abstraction in which a basic element is made to ‘generate’ other forms by rotation etc…” This is where my project is limited, and where if I fail I might try again. My project is highly ordered, and controlled. This is validated though, by Gallantner’s assertion that even “an art practice that uses a dynamic complex system to create what is ultimately a static object or recording is still generative art. As is, for that matter, works resulting from the use of simple generative methods,” (Gallantner, 9).  Though my work produces somewhat static drawings, they are created using complex systems which produce random and unforeseeable results and thus my work is generative. A further exploration of Boolean Oceanography would include more attempts at giving more autonomy to the system. Right now, the title of the project represents my own technical limitations. Boolean (noun) is a binary variable, having two possible values called “true” and false”. Most of my sketches run based on this principle of “if not this, then this”. This kind of binary logic runs throughout my sketches and is a major theme. Were I to continue on with this project this project, I would attempt to expand this logic to include more parameters whenever possible.

In terms of my code, I relied heavily on the logic of size and direction control. Using the equivalent of “true” and “false” terms, I have been able to animate creatures that go across the screen over and over again. Using the random function, I have been able to randomize color and location in my sketches, as well as add random noise values into my sketches. In “Aurelia Aurita 1”, I have used variance to warp and distort my sketches, and noise to make them move about in a jumpy, twitchy manner. At each step, I have added noise to further distort the images. In “Rainbow Cetology 3” and “Mola Mola” I used dimensionality to create rich, textured backgrounds that vary and are perhaps the most generative aspect of my sketches. These are the places in which I have handed over the most autonomy to the system. In each of these, vector drawing paths have been augmented using noise to create a non-linear path across the screen. Each sketch in Boolean Oceanography contains custom functions which determine the location and direction of my vector drawings. In “Mola Mola” and “Rainbow Cetology 3”, these custom functions set up the basis for the drawing of the elaborate, noisy backgrounds that I have described. For my own personal process, I find the use of axes to limit what I can do with my sketches and instead, for the most part, set x and y coordinates manually. For future progression of this project, I would add interactivity to change the way the viewer engages with the sketches. Right now, each sketch is not very interactive; however, I could see adding mousePressed and keyPressed to have the viewer create the rainbow whale stripes or other vector drawing locations within the sketches.

Right now, I expect the viewer to engage with my sketches as escapism—think Ecco the Dolphin meets Cory Arcangel meets the digital equivalent of a chainsaw. I aim for my sketches to be personal, and connect with my viewers. Some of the sketches almost feel like self-portraits. For example, I see a lot of myself in the ocean sunfish that moves across the screen in “Mola Mola”. I have recently been following a series of commissions done by Rhizome called “The Download”. In this series, different artists create a body of work that is then zipped and able to be downloaded by the viewer. In essence, this project turns the desktop space into the gallery space. Similarly, I see my work connecting in viewers’ own intimate spaces in this same way. Alternatively, I can see Boolean Oceanography projected in a single room, each sketch projected on to four walls so that they all overlap each other. The contrast between my technicolored sketches and my black and white sketches, in addition to the contrast between my jumpy, unnatural movement sketches and smooth, flowing, organic movement sketches should make my viewer reconsider what is natural and bring attention back to the medium. Ultimately, I want to turn either my viewer’s desktop space, or a small room that they are in, into a digital ocean.