The background for my art piece will consist of old, black and white photographs acquired from flea markets and thrift stores around New York state. An image of the artist will be added to the photos inconspicuously.

Visually, this work stems from an interest to combine photographic images with drawings and  abstracted graphics. Previous explorations into the combining their contrasting visual elements together have focused on creating cohesion between the two types of imagery. 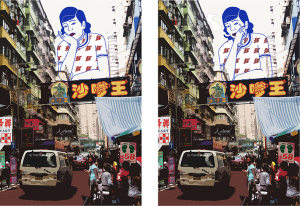 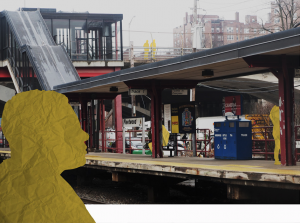 For this project, I don’t have much of an interest in creating cohesion, instead I want to see the photograph engulfed in the coded visuals.

As it is my last year at Sarah Lawrence College, I naturally find myself wondering about the next chapter in my life. The recent election also has me thinking about my place in this country; how I fit in, and whether or not I want to stay. My family and I have always oriented our lives towards America. Though we have always lived around South East Asia, most of the films, TV shows and culture we consume is American, and my parents’ goal has always been to send me here for higher education.

Through this project, I am physically inserting myself into American family pictures and into the standard of “normality” that Pop Culture asserts the American family life is. I am interested in the different visual effects that can be produced by coding on top of the images, and how these accumulations will grow and alter the photographs. While I think the background in this work will be highly important, I believe that it is the coded imagery that will really change the story of the photograph. 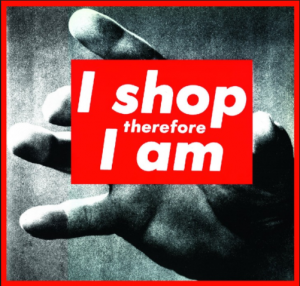 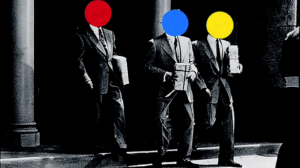 Though I knew I wanted to incorporate photographs into my coding project, I wasn’t sure where else it would go aesthetically, or even what the message would be. At first, I looked to Sonia Sheridan, as she creates generative art that using photographic scans of herself. However, I decided to move away from manipulating the photographs themselves and create generative sketches on top of the photographs instead.

I then looked to John Baldessari, particularly his dot series. I was interested in how the simple graphic shapes obstructing the faces of his subjects changed the narrative and spirit of the images. With their faces covered by dots, Baldessari marks them with anonymity and creates distance between them and the viewer. While the colors are bright, I do feel as though there is an almost sinister, cold feeling to the now-faceless subjects. Because of this effect, I decided to focus my codes on the faces in the photographs. I hope that as the code progresses and the graphics accumulate on their faces, distance will be created between them and the viewer.

I also looked towards Barbara Kruger’s work, particularly regarding style and aesthetic. With simple use of red bars and white text, she writes short, declarative statements across the photographs that make a strong statement to the viewer and forces them to redefine the context of the imagery she uses. I intend on only using black, white and red as well to evoke the same emotional intensity that Kruger’s work has. She also uses photography and imagery that feels iconic and classically American, which ties nicely into my goals for this project.

The code will exist in the foreground of the piece. While the background provides the framework and context, the code is what will fulfill the goals of the piece and of course turn it into generative art. I anticipate that I will keep all, if not most, of the code in red, to stand out from the photograph and create cohesion between the pieces. While I want their form to vary from piece to piece, they will all be made with some noisy incrementation that allows the forms to accumulate and grow with the frame count.

It is important to the piece that the faces of the subjects in the photographs are obstructed by the code, so I would first need to be aware of the placement of the drawings, and the degree to which the noise will spread. To do this I’ll probably have to map coordinate points to orient my drawings to, by measuring the photograph out on Photoshop. Once I have the points from which I want the sketches to begin, I can also set up margins or axes to limit where the code spreads to. 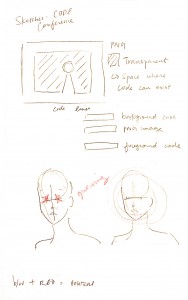 Of course, because this is generative art I don’t want to restrict my code too much. It already will be generative in that I will be creating systems that dictate where these graphic images will show up and how they will look like, and by virtue of the noise function these images will change each time they’re generated. But I also believe that, since these graphics elements are growing, unlike Baldessari’s, the mood or narrative given in the story is also somewhat out of my control. As I decided to insert an image of myself into the piece, I wondered if I should intentionally create a separate .PNG file of myself to layer on top of the code, so that no matter what I wouldn’t be obstructed. But I believe that who and what the code obstructs, though guided at first, could end up changing and the effect may be something worthwhile to see as a generative artist. In short, while I am purposely seeking to change the narrative of these images, I am curious and open to see what the system turns it into.

These are two ideas of what these graphic accumulations will look like, and how I want them to evolve. For the spirals I will definitely be using loops, first to increment the amount of noise in the spiral, then later to draw the lines themselves. I also will keep the alpha on these spirals very low in order to not overwhelm the drawing right away.

For the sketch idea that starts with rectangles, I was inspired by Callum’s piece, “Alive Again”. His seems to have some 3D aspect to it, but I anticipate my sketches will stay within the 2D realm, to keep with my aesthetic goals.

I did experiment with creating more dimension in my conference work earlier, taking advantage of transparent .PNG files and editing a background code as well as a foreground code. 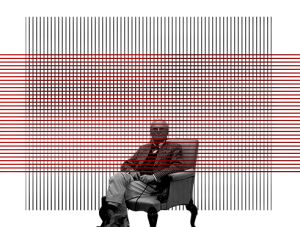 As of right now I’m still considering creating a piece in this way, if it manages to still cohesively work with the Barbara Kruger-aesthetic I’m aiming for.

Something I’ve struggled with this during this class is having my sketches change over time, and not stay stagnant. My earlier pieces definitely didn’t change drastically over a longer period of time, and I took a lot of inspiration for this project from Jack Colton’s pieces, as I always felt like his code did a good job accumulating and changing over time.