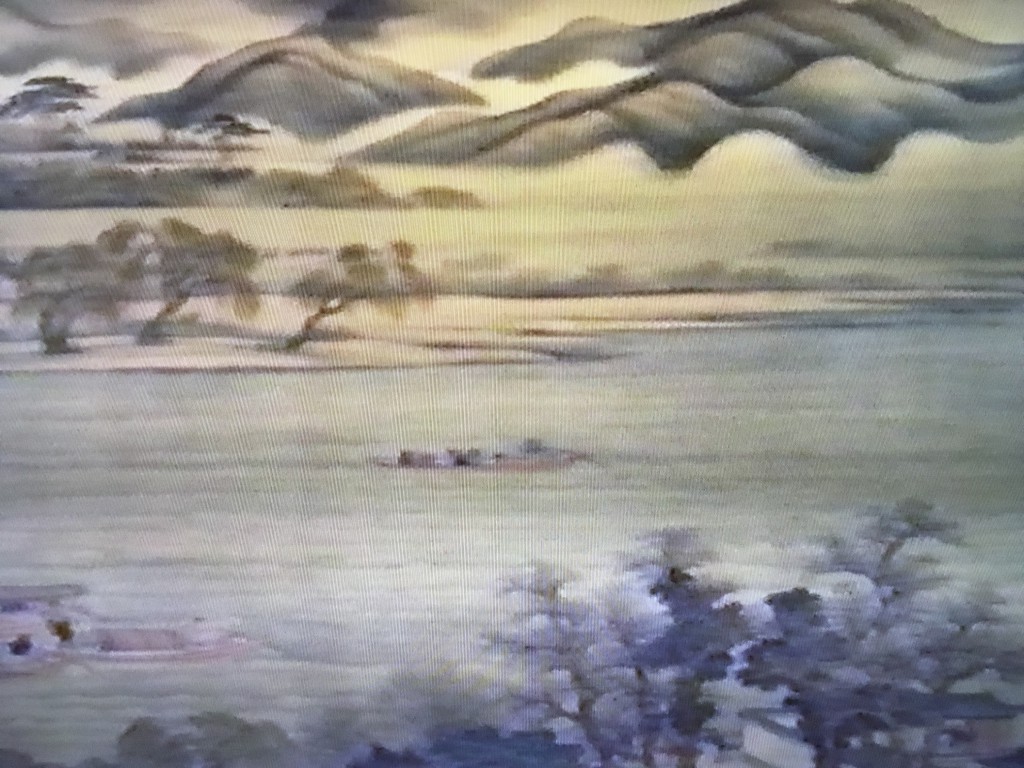 In A Day on the Grand Canal with The Emperor of China David Hockney brings all his expertise as a contemporary painter to bear on an analysis he does of a 17th century Chinese scroll painting. The most striking aspect about this scroll is the way it engages space – I called this Spatial Elaboration in the title of this post. Hockney illustrates an example of this when he arrives at an interesting junction along the river. Coming down a street in a village, our view works from bottom left to top right. But if you pay attention as the street goes around the corner, the viewpoint shifts: the lines of the roofs of the shop stalls, and the store fronts indicate as much. We see sides we would not see if the viewpoint stayed the same. It is a shifting perspective we are talking about now. At the same junction there is gorgeous wooden bridge with a rounded top line that is seen from the bottom right, the same place the second order of store fronts is seen from: when you go to the top of the bridge then, with your mind’s eye, the wall of a house becomes visible that would only be visible from the bottom left, the perspective we had in the first place. The perspective shifts organically, according to the needs of the art in the painting. So you see what you need to see when you need to see it, but it still all makes sense to the logical mind too: it is not paradox in the end, actually, because it works. As Hockney remarks about the experience of seeing, and analyzing, the painting, these devices “make it far more spatial than our old friend Canaletto.”

There is also another scroll, from slightly later, painted 75 years after the first one. Hockney is keen to trace a difference in style back to Western missionaries arriving in China with examples of Western works, deploying fixed perspective systems, in the time since the painting of the first scroll. The scroll again depicts a journey by the emperor, but this time “everything is beginning to recede: even the landscape is receding, the [emperor’s]  boat going into the space, as it were, and not along it.” It is true, the parallel lines and fixed focal points draw our gaze very much into the picture, and at that, into one particular point at a time, instead of gently over the surface of the whole thing.

Difference in spatial qualities extend beyond the vista of the whole, to the depiction of the particular: the characters are, Hockney notes about the first scroll now, less suspended in space. They tie in more organically with the land and the village and the river because they themselves have the organic features of animation and engagement with the other figures in the scene. There is linkage, and overlap: there is the unexpected effect of depth now that the more two-dimensional space (in the absence of the one vanishing point to help create spatial depth in a more three dimensional sense) is broken up like this, or rather, played with actually.

There are interesting relationships between elaborating space, and elaborating time: Devices relating to “telling time,” even the story of time on one level, include such creative tricks as subtly shrouding the scenery in mist to convey a jump, as it were, in space, and therefore time, at times: the mist goes on to get so thick that only individual aspects of the landscape remain visible, and coming out the other end, the space we were in has changed. This particular device was a way to dissolve an edge too: there is no saying where or when boundaries were crossed, or to what extent; instead it is a continuous flow through the physical scroll (through a device like this made even even more capable to “hold” vast amounts of space that the 72-foot-length of the scroll already does).

These strategies, for this is what they really are, to handle space and time and the narrative they can construct into a work of art relate very practically to where I was with my game at the time of the Unity play test and where I am now still: in fact, these questions will go with me until the game is fully developed. If I boil the aspects I talk about above down to the shifting perspective and the mist-device in particular, I can definitely find junctions and spaces within the overall space of my game to deploy these, or similar ones, in the vocabulary of the game language I have already established. For instance, a version of the mist for me might be a cloud shaped and colored to parallel the clouds already present out on the horizon line.

This very trick would also be a way for me to address a criticism that emerged in the play test: the question of the relationship between the landscape in the “back,” as it were, and the main Garden. Can characters cross over? What is the significance of the city? Bringing things like the clouds out from the back into the front, playable space, represents away to tie it all together aesthetically, if not thematically, perhaps. Perhaps I really don’t want the character to go to the city in the end, in the game and where I am headed with it now that is – I simply don’t have plans for that (yet). But a device like this can give me a bit of breathing room: by creating a bit more of a unified field of sorts for the whole game to organically come together, this question suddenly does not seem as important anymore.

An overarching design idea is to actually shape the landscape of the Garden in the shape of a fish, the ichthys, or the Jesus Fish in Christianity: that was an idea I had to begin with actually, something I subsequently went away from, and now would like to come back to. 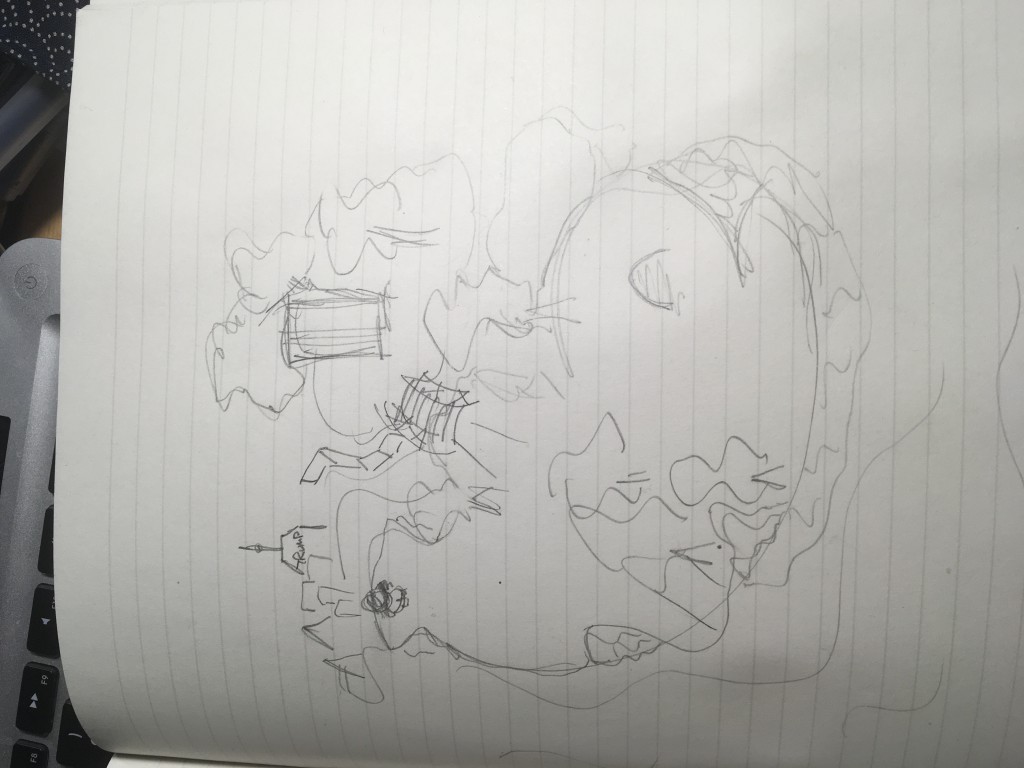 The relationship of the Garden to the city can be something like the river, river bank landscape and villages on the one hand, to the city behind the walls at the end of the scroll in A Day on the Grand Canal on the other. The river landscape exists in contrast to the city, the city does not need to fully explored either. The scroll’s artists were also not very concerned with their city: in fact, they made heavy use of the very mist device I was talking about, not so much to jump in space this time (that happens too, though) – but to pass over the city, to choose not to elaborate on it. It is the outside form of the thing, rather than the inside detail, that comes to fulfill some function for the rest of the space, and that is fine. I just need to put my finger, in not directly on, then at least a little closer to, what that function might be. 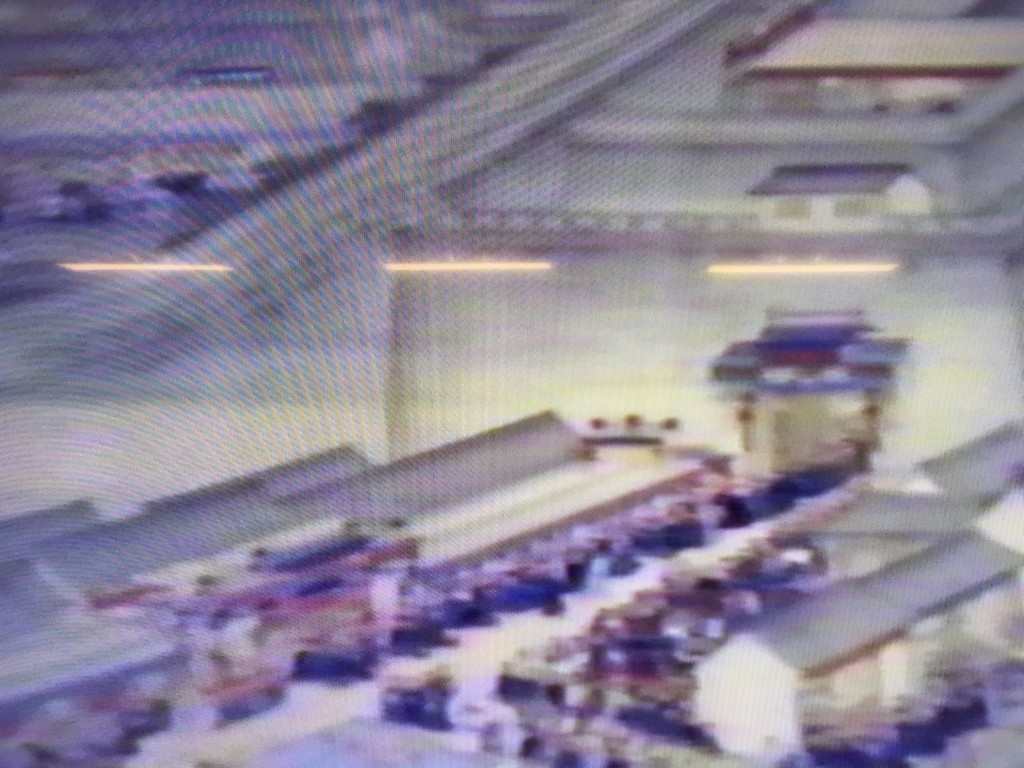 In these ways, I have found my work to develop very organically, and in pushes and rushes and inspirations rather than continuously. We talked about this in class: the ideal conditions to get artistic, creative work done. They seem really different to more intellectual and academic work. For me it remains environmental, and has a lot to do with my schedule: I do not think I can do this kind of work as easily or to a better quality if rushed and to a deadline. I really notice it when I have things from my other classes on my plate … when I compare those days to a weekend with a little or nothing to do, it’s the latter I can get a lot of doodling, drawing and writing done in. The ideal for me is a lazy, rainy Saturday morning, with a bowl of cereal and a book – but this stands opposed to more realistic and practical requirements life makes generally.

Right now I want to push what I can do with animation and collision to bring the world I am creating to life. I want to use collision more than just on the edges to create unexpected obstacles and thus add complexity to the surfaces. I am working on the river right now, one more strategy to tie in the background to the foreground. I had already established the body of water coming and going into the cityscape: I want to extend that into the Garden directly and exploit it as a great creative opportunity for some atmospheric animation. With perhaps only two frames, or more, I would love to add mirror reflections and the light bouncing off the surface of the water as movement. I would love to add falling leaves too, to the trees. 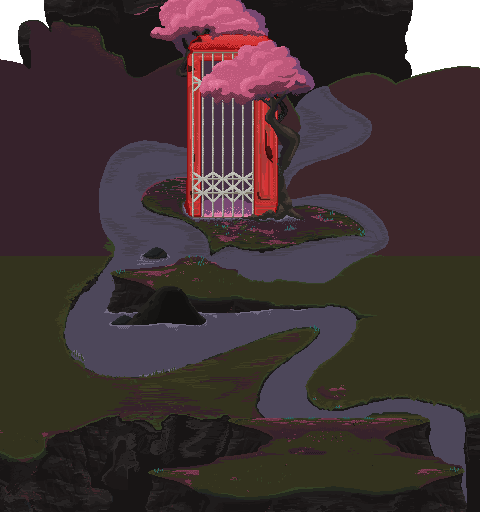 Lastly, one more thing I want to change a bit is Adam’s walk cycle, which as it is now does not have very pronounced leg movement: