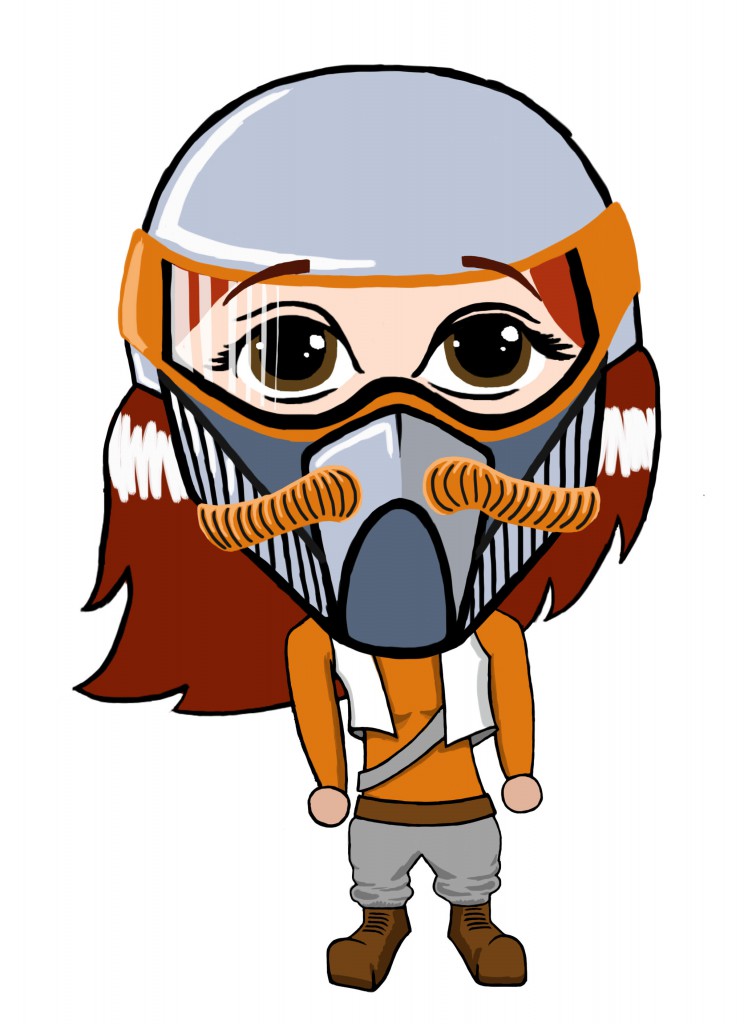 My protagonist is a woman named Alessa Solaris, who lives in a futuristic society where human space travel has been achieved. In this universe, the resources on Earth have been completely diminished and humans have taken to gathering resources in the form of raw elements from elsewhere in the galaxy. These raw elements are bought and sold at high prices and used to create compounds that make up the materials humans use for everything from medicine to fuel. And because the element trading market is so lucrative, it has brought about a resurgence of space piracy. Alessa’s role in this world is one of conflicting loyalties. All she wants is to get married to the love of her life, but she has no money to contribute to the wedding, and she is desperate. Seeing piracy as the quickest way to get the money she needs, she joins a crew and sets off on her first mission to plunder a space station that is known to have a large supply of elements. Unfortunately, she soon discovers that this space station is where her fiance, a medical professional and virologist, is using those elements to create a cure for the viral epidemic happening on a nearby planet. This is how Alessa becomes torn between following her captain’s orders, and protecting her fiance, who plans on guarding those elements and his work on the cure with his life.

The major goals for this character design was to create a character who exhibited a merging of two different styles: futuristic space and old fashioned pirate, as well as showing her as a female, and making her seem friendly but somehow connected to the other two main characters who both exhibit differing styles: one being a healer and scientist, and one being a marauding space pirate.

To show Alessa as feminine, I focused on eyes and hair and slightly on body type. I didn’t want to fall into the trope of a female character wearing a skin-tight jumpsuit to show all her curves, so I thought focusing on feminine eyes and hair would be a better approach. However, if I wanted to show her hair, I couldn’t have a full space helmet, so I tried to take some inspiration from Starlord’s space mask from Guardians of the Galaxy.

This led to a helmet that covered half of her head and a gas mask type attachment to her nose and mouth. This led to the misunderstanding that she was from a toxic environment more akin to a post-apocalyptic world. Which then led to the eventual development of the full face and top of the head type helmet that one can see in the final character design. This communicates the image of space much better. Also, thicker outlines and some light reflections were added to the eye protection so that it communicates goggles or a visor attachment to the helmet much better.

Since the helmet evoked the image of space more than the image of pirate, I used the clothing design as an opportunity to show more of a classic pirate type style. I originally was inspired by the movie Alien to give my character a jumpsuit that looked more like a uniform that one would wear in space.

This idea evolved because of the need to add elements of the classic pirate crewman style, which is where the vest, the belt, and the loose fitting pants come from. The heavy work boots are used to evoke an image of a tough work environment that requires stability and sturdiness, like one might come across as a crew member aboard a spaceship. This is also why they are more box shaped than any other elements of this character’s design, since square shapes indicate sturdiness and immovability.

I used elements of color and shape to work out the other design details. Because she is the protagonist, I wanted to make sure the players can feel like they trust her. Therefore, I tried to stick to rounded corners, soft edges, and circular elements. This is why her eyes are so rounded and prominent. They communicate an innocence and trustworthiness. These characteristics are also exemplified with the eyebrows tilted upwards because it gives an openness to the face that echoes a friendly personality. The repeated use of round and circular shapes in the character design plays on the human habit of reading traits with those shapes as friendly, open, innocent, playful, and slightly feminine.

Color also plays an important part in the design of this character. First, I wanted to stay away from most cool colors like green, blue and purple, because those are usually used to convey a mysterious, untrustworthy, sneaky, or devious tone. However, while redesigning the helmet, I thought to use some grays with blue and purple tints to show her connection to the less than morally sound pirate crew. Other than that, I tried to stick to vibrant warm colors like red and orange. These vibrant colors convey energy and bring the player’s attention directly to the character, thus identifying her as the protagonist. The white in her vest also brings attention to her because it is a bright contrast from dark and mysterious tones, but is also associated with innocence.

This character design evolved as I created it. There was really only one sketch at the beginning, but the elements of her design changed as levels of the character were developed. 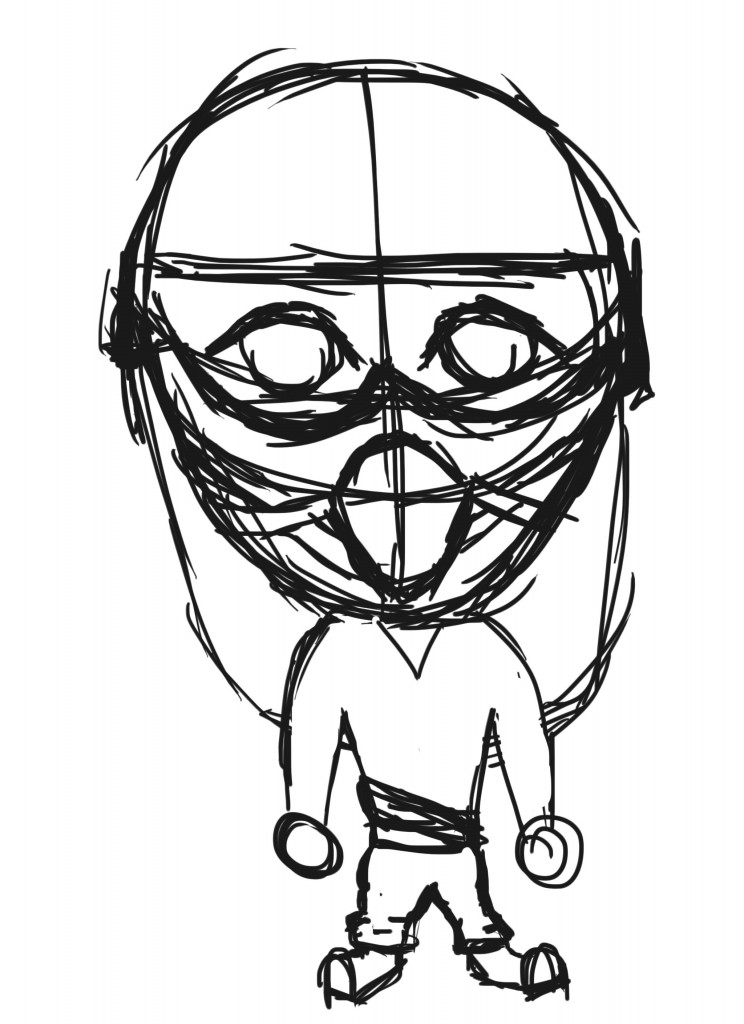 She initially started with straighter hair, but to make her more energetic and dynamic, the hairstyle was altered. Her figure was also curved and rounded a little more during the outlining phase. 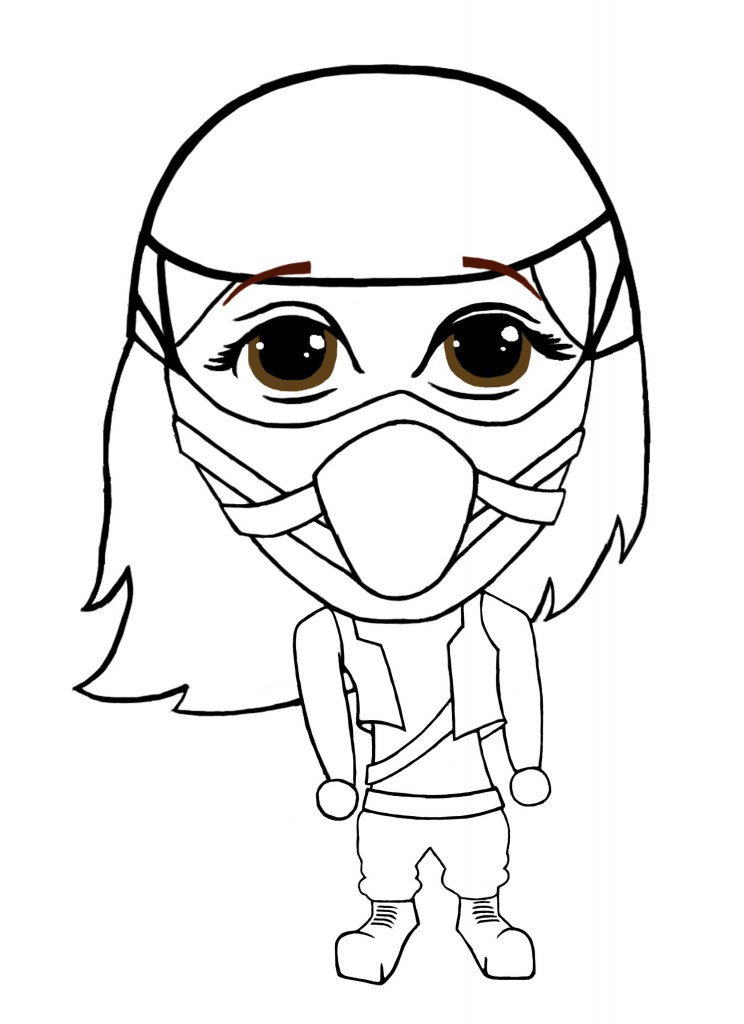 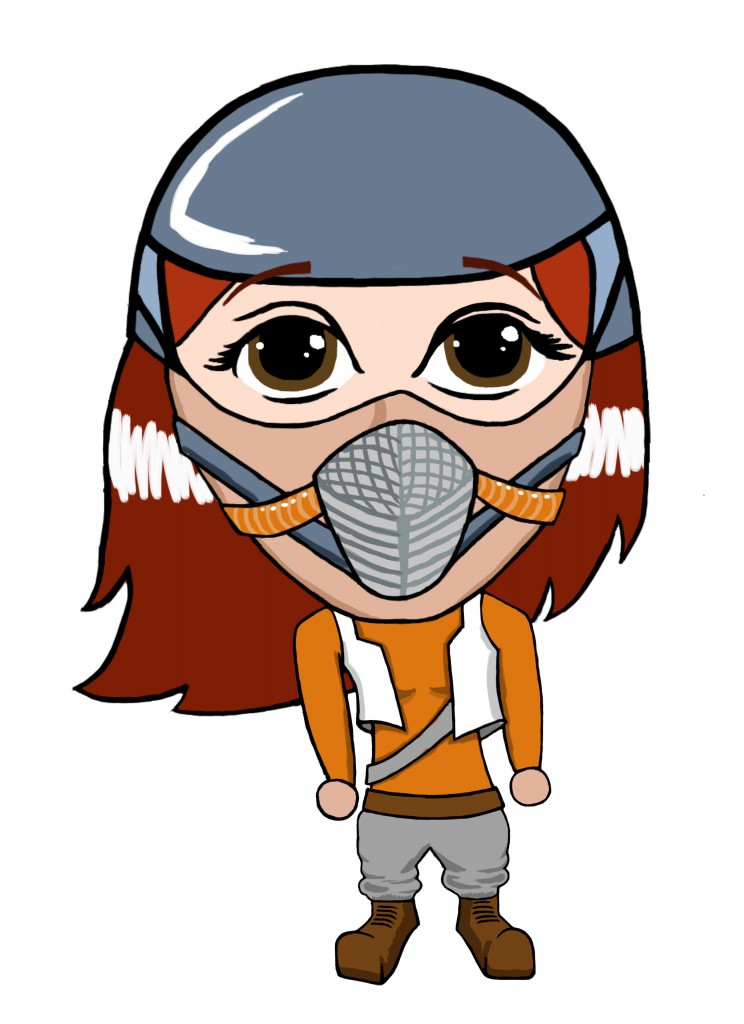 When going through the second phase of design where the helmet went through the most alterations, there was a sketch period where I played around with some other ideas. I thought about making her boots bigger, or giving her a big oxygen tank backpack, but these ideas were ultimately scrapped, as the bigger boots conveyed more of a stomping and squishing mechanic, and the backpack could not be seen from the front and would only cause confusion in this design. 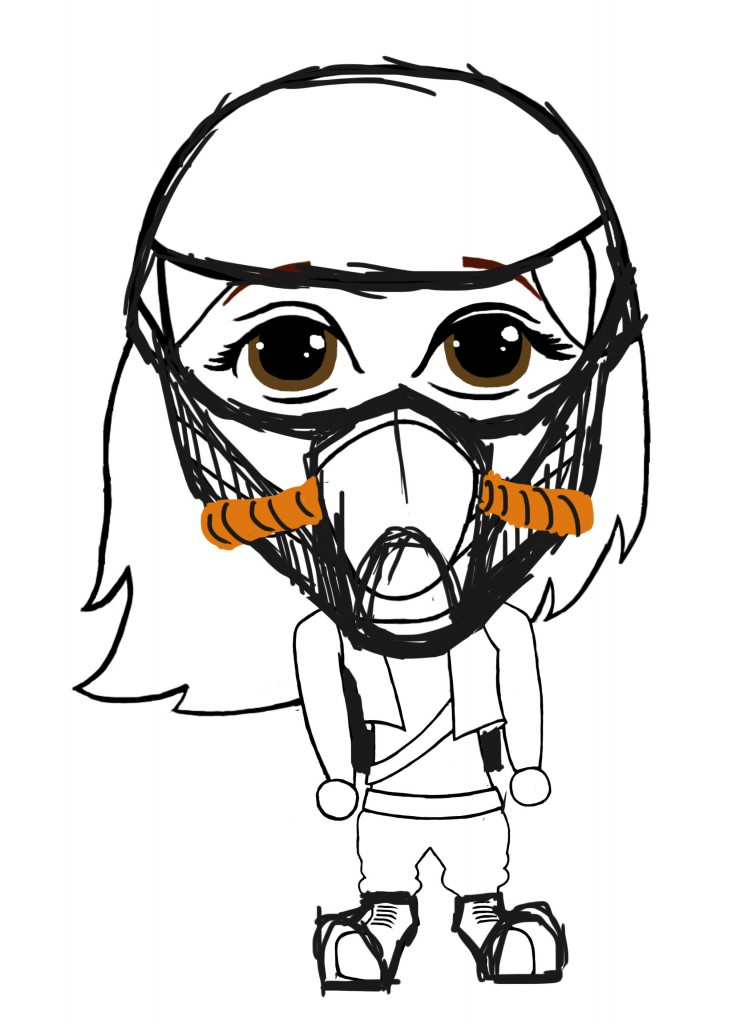 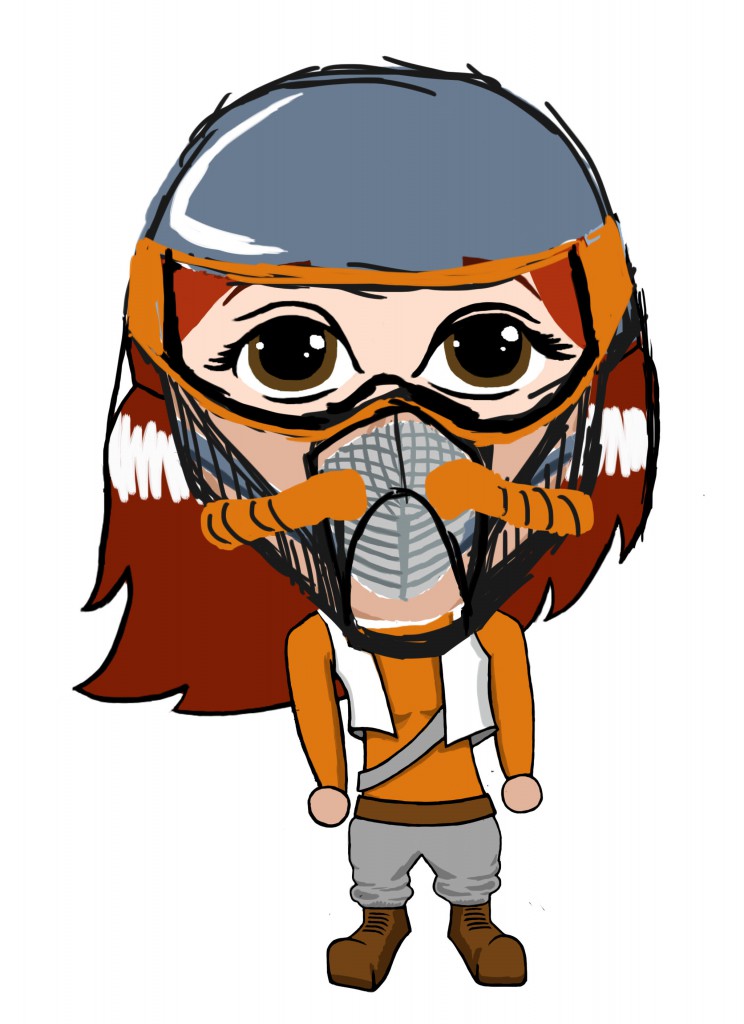 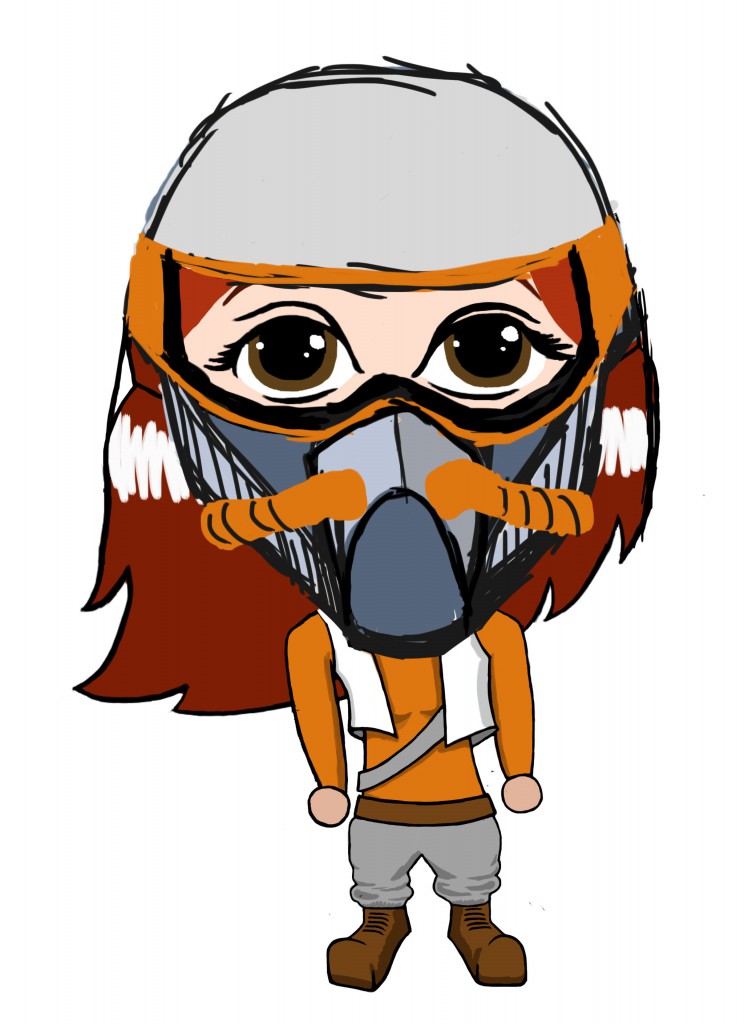 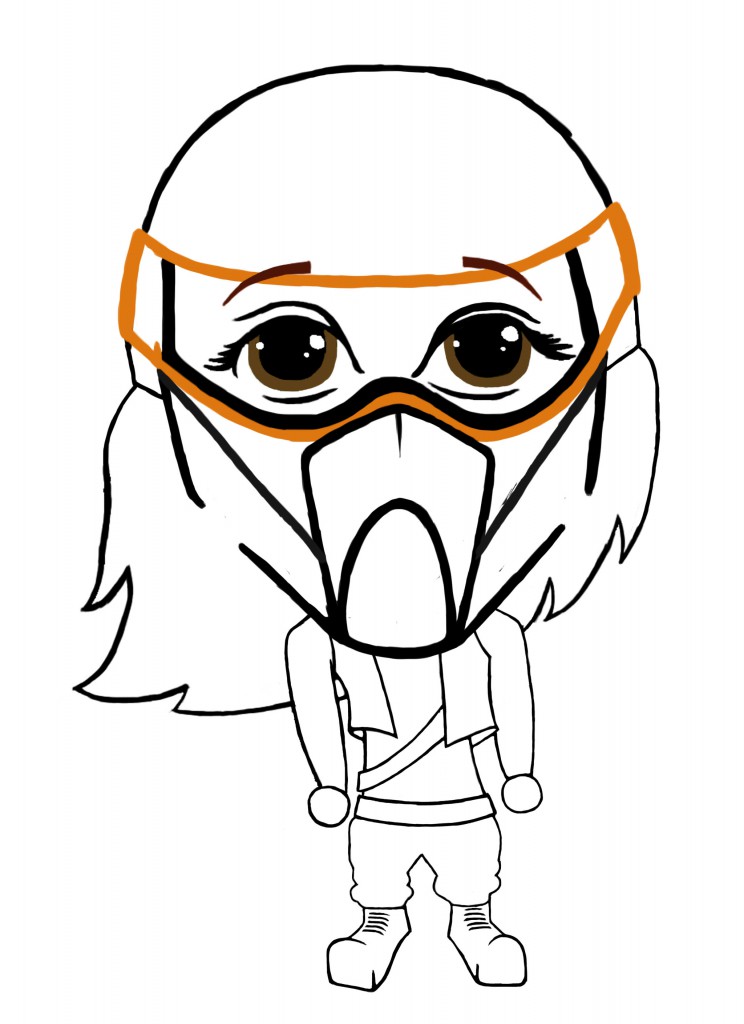 I also ended up exaggerating the effect of the helmet on her hair by making it curve out from under the helmet like real hair does. This made the borders of the helmet more clear and made it look more useful as protective head equipment. I also exaggerated the reflective shine on the goggles to convey more clearly that they are goggles.

As I am much happier with this iteration of the character’s design, this will most likely be the final, completed version of the protagonist. Also, this design will continue to affect how the other NPCs are designed. For example, the captain will have a new helmet that looks similar to the protagonist’s so that they are shown to be related through profession, however, the captain will be slightly more extravagant than the protagonist to show his higher rank. As for the fiance, the other NPC, he will show similar color and shape themes to be shown as innocent and friendly, but these similar themes will also act as a way to connect the two characters in the player’s mind.

The world design will also share similarities with the protagonist’s design. For example, anything related to the protagonist’s personal belongings should be in the same color scheme as the character, so oranges, reds, browns, and grays should be present in her living quarters. Also, to appears as if she fits in the environment, the world design, specifically the space ship, should look like the kind of heavy duty work environment that would warrant her need for those sturdy work boots.

By working with specific constraints based on style, story, and theme, this protagonist’s design has changed and evolved. Color, shape, clothing style, and attributes such as her helmet and boots give the player a clear idea of who this character is and what kind of world she lives in, as well as what her relationship to the two NPCs might be. If a new conflict appears in regards to the protagonist’s design going forward, she might change slightly once again, but for the time being, she is a completed character. 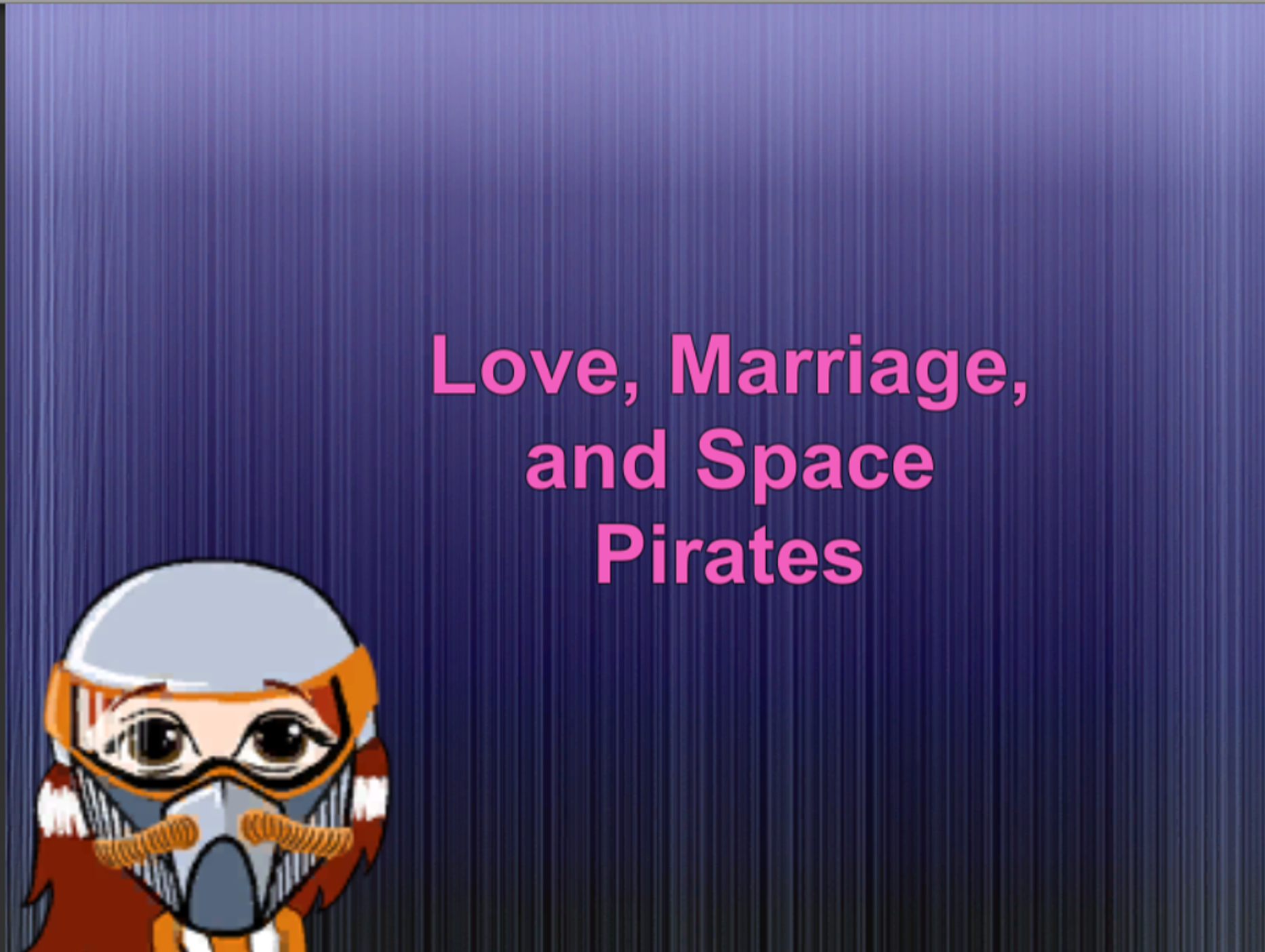