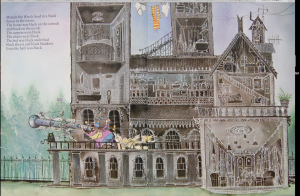 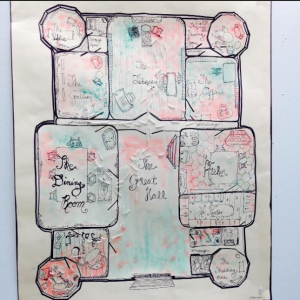 My conference project slowly seemed to design itself, as it became layered with meaning and markings over the time. I was always fairly confident that I wanted the project to be framed around the book Rebecca- the book is written in a way that provides keep imagery as to the house of the setting- Manderley. I went through the book, tracing the way in which Manderley is detailed, and created a floor plan based upon this. I wanted to give my floor plan a Victorian feel, and did so by including molding and mirroring the architectural styles of the time. I also wanted to use the furniture described in the book, and so I included the pieces into my surface area (the floor plan).

I really wanted to tap into the way in which the novel taps into the concept of “invisible” presences, and so I used color to show the presences of Rebecca and Max in Manderley. The narrator of Rebecca seems to constantly feel their presences as she passes her time in the house, and so I tried to display how she spent her time when alone, dwelling in a house that could never feel like her own.

In order to show the difference between “time” and “presence” I used different materials. The narrator’s morning (when she is alone in Manderley) is displayed by thick white thread, to characterize her personality of simplicity. The white thread juxtaposes with the strong Victorian colors used for Max and Rebecca; Max is shown in a green watercolor, whereas Rebecca is a deep pinkish-red. Rebecca’s color, I find, is a rather amusing story, in that I was very particular about finding the exact color, and, unable to create the perfect shade with my watercolor palate, I found that the joys of a “Kool-Aid Drink Mix” of fruit punch perfectly solved my conundrum.

The map was inspired by Victorian blue prints, but the particular style was very much developed in awe of the highly detailed illustrations of Korky Paul (a children’s book illustrator). I’ve included a picture of the house that Korky Paul drew in my post (top image).