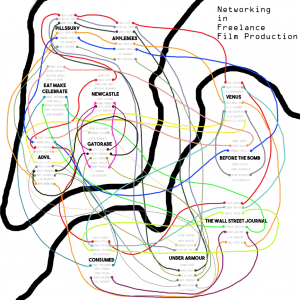 For my conference, I created a visual representation of my own network in freelance film production. I traced the outlines of Brooklyn and Manhattan to show where these films/commericals were produced, and I aligned them in chronological order (going clockwise), starting with Pillsbury, which I worked on in 2011.

All of my personal contacts are on this map, organized by the jobs on which I met them.

Every contact has a different color, and there is a line for everytime I worked with them.

So, for example, Paula Cohen has seven lines, but Rachel Taylor only has two.

Dave Clark has three lines but because I’m not very close with him, I made his line thinner.

I only worked with Donna Imbarato twice, but I became very close with her so I made her lines hot pink so as to be noticed.

Ultimately, this is a map of the invisible because it’s a map of where I stand in my work environment . I haven’t made much of anything, so my network is everything.

I act as a flaneur (or maybe as a stalker) by keeping up with these people on linkedin and facebook. They don’t know the extent to which I watch them. But what often happens is that they change companies, or start new businesses on their own, and that’s when I reach out. I’ll ask if they remember me from ____ ______ and ________, and I’ll ask if they could use someone with my skillset to help them get started on their new endeavor. 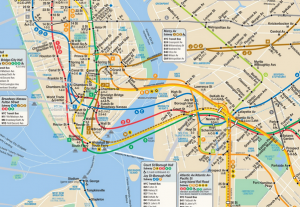