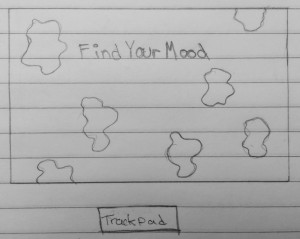 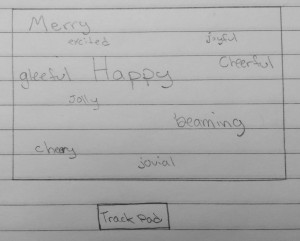 What does it do?
This interaction is a digital mood ring. The home or start screen will be a darker background with colors moving all over the screen, similar to a lava lamp. I want this to give off a sort of magical feel. Then the user will place their finger on the trackpad, move it around and the program will tell them their mood. Just like a mood ring, a color will appear that is a representation of the mood. For example if the mood was happy, it would display yellow, not a  stagnant yellow color but a liquid moving one with slight changes in the color. It will also display the mood in words. Like “happy” and it will have synonymous floating around describing your feeling.

Why am I interested?
Whenever I walk into a shop and there’s a mood ring on display, I always want to try it on and see what it thinks my mood is. It’s fun if the ring gets it right and still exciting even if it’s way off. It only takes a minute and is simple to do. It creates a little bit of mystery and exciting fun. I’m always interested in seeing if people or computers can guess things correctly.

How will it work in a public space?
I hope that the lava lamp like colors will attract people and draw them over. I think because it doesn’t take long to do and is pretty easy, people will go up to it and try it out just for fun. I hope that it creates some new connections between people and they talk about how it guessed it right or so wrong. Maybe they’ll try to see what happens when they both move the trackpad.

How does it create a magic circle?
My interactive creates a magic circle by having a place (my laptop) where play can exists. The user can interact with the space and find their mood, which is hopefully fun. Finding out their mood should be exciting and they should have fun in the arena I created for them. It also builds a place for people to have exchanges about their moods or the program.

Norman’s seven steps:
Forming the goal: The user will see the moving colors on the screen.
Forming the intention: The user will touch the mousepad and see that the screen changes to display a mood.
Specifying the action: The user will realize that when they move their finger on the trackpad it tries to guess their mood.
Executing the action: The user will move their finger around the track pad and wait to see their mood.
Perceiving the state of the world: The screen will change and the images will move to show that it received the movement and is calculating the mood.
Interpreting the state of the world: The screen will display their mood.
Evaluating the outcome: They will either agree with the mood outcome or disagree and hopefully enjoy the experience.

Design: I wanted the design to be intriguing and mysterious since I feel like mood rings work in a fun, unexplainable way. I was originally going to use the motion tracking code and movement to output a mood but I later decided, with some guidance from Angela, that it would be more realistic if the user actually touched the trackpad, since we are used to interacting with mood rings through touch. I think the design will appeal to most people because it has a low barrier to entry and the colors and movement on the screen are inviting.

Code: The size and background will be in the setup function and the code for the trackpad interactivity will be in the draw function. I will use variables for all the different moods and colors. I don’t know how to completely code this interaction yet, but I plan on also using the restart function to take the user back to the first start screen.