Heretic is a 2D PRG that follows a young girl living a barren village. Resources are slim, the soil is untenable, and the villagers only think of their own needs for survival. The villagers live in fear of dying and the unknown, and have begun to carry out witch hunts, resulting in the burning of various women at the stake for crimes of witchcraft. The player can choose to leave the village and enter the forest, of which most villagers are afraid. If the player brings an item to the book, the village will be changed – for better or worse. The player can decide the fate of the village and the villagers based on what items they bring to the book. For now, I’ve designed four items that the player can bring to the book – a shepherd’s crook, a sword, a shield, and a potted plant. Each item is symbolic of the change it will bring to the town, though not necessarily in the way that the player expects, and not necessarily in a way that the other villagers are happy with. The potted plant, when brought to the book, will result in the construction of a new garden for the herbalist, giving her the ability to grow more plants. The player can continue this cycle and improve the quality and size of the garden with each trip to the book. However, the blacksmith may feel threatened by the increase to her resources and decide to accuse her of witchcraft, leading to her being burned at the stake. The widow, also, has a shepherd’s crook from her late husband that may be brought to the book. If the player does so, the widow will receive a sheep and a small plot of grass in which the sheep can graze. Again, the player can continue this cycle, but risks arousing suspicion of witchcraft the more the player helps the widow. During witch hunts, the women targeted were primarily women who seemed threatening to the capitalist control of production and reproduction. Herbalists were threatening because they had natural knowledge of plants, and often assisted with women’s reproductive health. This power over life and death was threatening to a system that need to control reproductive power to be able to exist. Widows, too, were threatening, because they existed outside of the bounds of marriage. Ultimately, I would like this RPG to illuminate the sexist underpinnings of the witch hunts, and the way they were used as a means to protect capitalist patriarchal power through player choice and consequence. If the player chooses to bring the blacksmith’s shield to the book, a large wall will be built around the village. They can continue to fortify the village by bringing the shield back to the book, and the villagers will never suspect the blacksmith of witchcraft, because the resources he provides isn’t threatening to the capitalist system. The nature of the book should be ambiguous. It may be magical, or it may simply give the player the practical knowledge to achieve the change she seeks. Originally, I was going to have the player bring items to a gathering of chanting women out in the woods, but decided against it because I play testers very quickly associated it with a coven of witches. The book, to me, represents knowledge, which is ultimately what truly threatened the capitalist regime.

This game is non-linear most obviously in that the goal is entirely up to the player – whether they want to help or hurt the village – and in that there’s no set path to reach that goal. Though there are only a few items to bring to the book right now, in the future, I want there to be many more, so that there are even more paths and twists and turns. One path won’t necessarily cut you off from another path – if you build a wall with the shield, you can still bring the potted plant or the shepherd’s crook to the book later. Though it will take a lot more design time, I want this game to reflect the possibility of alternate timelines as Borges described in Garden of the Forking Paths. In one instance of the game, the player may wish to indirectly kill all the other NPCs and leave the village in ruins. In another, the player may achieve a utopian village with bountiful resources and no conflict. In another, the player may try to save the herbalist but attempt to kill the blacksmith and the widow, and so on and so forth. The paths should fork and cross over one another and double back and allow for as much exploration as possible.

In a lot of traditional RPGs, players use weapons to combat enemies, and the enemies make up the bulk of the narrative. In this game, there aren’t any discernible enemies.  Yes, you can capture and kill a rabbit – but that’s not an enemy. The player can decide to buy the sword – one of the more expensive items – but the player can’t use it to kill villagers. If the player brings the sword to the book, the player may expect to receive some suit of armor, or a bigger sword, etc. But instead, a random building in the village will be destroyed. Just as the book isn’t necessarily magical, the changes it brings aren’t always good. The changes the book makes depends on the player and the items the player brings, and just as it can help make the village great, it can also destroy the village. In that way, this RPG is non-traditional – often, RPGS have one goal – to save someone or something – and there is one way to achieve that goal. In this game, the goal is up to the player, and the ways to achieve that goal don’t follow traditional narratives. For many games, a sword represents heroism. But in this game, the sword represents the violence of domination and oppression. 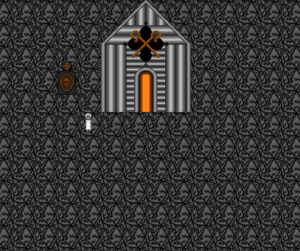 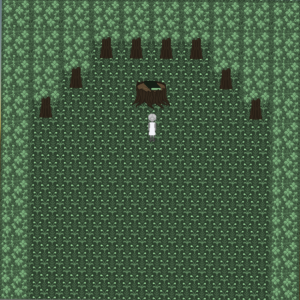 Overall, I’m satisfied with how the game looks and feels. I drew inspiration from illuminated manuscripts of the 1400s and 1500s – a time of intense upheaval in Europe as the society transitioned from feudalism into capitalism. Illuminated manuscripts were usually drawn by religious orders, and were only accessible by those in power. I wanted to play with their patterns and symbols to evoke a religious and medieval aesthetic in my game, and also to re-appropriate the styles of the books to turn them against the will of the aristocrats that commissioned them – even if they did so five hundred some odd years ago.

During my last leg of development, I decided to change the main village to be very rocky and barren, in stark contrast with the forest.  I wanted to convey the level of separation of the humans from the natural world through color in my game. Often, human culture and society feel like they are natural to those participating in them, thought they are anything but natural.  The colors of the human dwellings have bright accent colors that serve to further alienate them from the forest environment. 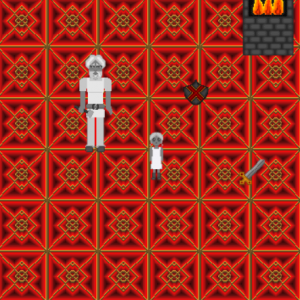 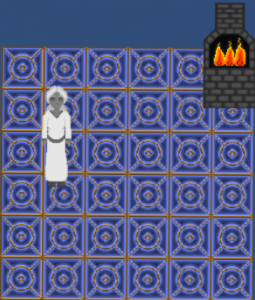 Working in 64×64 in this dev cycle was not the best idea, because each tile took at least an hour to make, if not much more. The rock facade took at least eight hours. I got lost in the artwork, rather than the gameplay.  I ended up spending a lot of time on water tiles that ultimately didn’t get much use in the game, because I worked on artwork before actually testing my paper prototype. I had the idea that the girl would maybe crash land on an island in a boat, but decided to scrap that idea because I wanted her to be a part of the community. I might use the water tiles for a fisherman narrative later, but I shouldn’t have devoted so much time to an idea I was completely unsure of. The walk cycle took a lot longer than expected because animating with pixels was a lot harder than i first thought it would be. It seems simpler because you’re working with small units, but it can actually get harder because making a bunch of squares into a cohesive moving shape is kind of difficult to do when you haven’t done it before. I got so frustrated by the walk cycle that I didn’t finish it till last minute, and then I didn’t have time to code in animation of items being picked up, etc. Animating the movement of the feet was particularly difficult, and I’m still not satisfied with the end result. I’ll probably change it in the future.

Always test your paper prototype first! That’s one of the big things I realized this semester. Don’t develop a bunch of art and THEN gameplay, because you’ll end up focusing too much on art and not enough on programming. I have a very clear idea of where I want my game to go now, but I have very little of it programmed because I was focusing too much on what the game looked like, and not enough on what actually happened. I spent hours designing the sheep above and it didn’t even make it into gameplay because I didn’t have enough time to program it. Granted, I still probably would have only been able to code and animate one narrative from beginning to end because the art is so detailed, but I wouldn’t have spent so much time on art that I’m now not sure if I’ll use. If I could go back, I would design in a lower resolution and make my paper prototype before I even touched pixel art. I prioritized art over programming and now my game looks really pretty, but it’s not actually that playable.

This was a really hard to game to conceptualize because I was working with really abstract concepts, but I’m glad that I did it. I want to keep working on this game because I don’t think there are a ton of RPGs like it, and the ideas I’m trying to illustrate about capitalism are ideas that I want to continue to explore. Designing this game actually really helped me to understand Frederici’s ideas, in a way that just reading them did not. I had a lot of fun working on this game and I definitely intend to finish it.